It is hard to imagine life without Amazon.com.

Even for someone of my advanced age.

After all, where else can a few clicks of mouse take you from the latest novel by Toni Morrison, to an 18th century edition of the works of John Locke, having stopped empower tools and women’s shoes along the way.

Yet the founder and chief executive officer of the world’s largest e-tailor whose net sales surpassed 24.5 billion dollars in 2009 is only 46 years old.

And Amazon.com has only existed since 1995, making it even younger than the class of 2010.

The moral of this story is that the right idea in the right hands at the right time can change the way we lead our lives.

The idea in this case was harnessing the power of the nascent Internet to create a virtual bookstore of limitless proportions.

The hands with those of our speaker, Jeff Bezos, a self-described nerdy computer science and electrical engineering major who graduated from Princeton with highest honors in 1986. And the time was 1994 when he and his wife, Mackenzie, sub the class of 1992, exchange the security of Wall Street where they worked at D.E shaw company for the uncertain prospects of the .Com Start-up.

But then Jeff points out, “failure is an essential component of innovation and invention. If you know it’s going to work, it’s not an experiment. An Amazon.com was nothing if not a ground experiment.”

Working on improvised tables in the garage of the Seattle home, and using his parents’ saving as start-up capital, Jeff fight the forces that caused most young companies to fail.

Partly he admits through his share of fortune. But also because of his unwavering determination to create the world’s most customer centric company.

And as he notes in his company’s latest annual report, “Of the 452 goals that Amazon.com has set for itself this year, 360 of them will directly affect the customer experience,” while the word revenue is used only 8 occasions.

I do not advise you to start off with 452 goals this year by the way.

But this is just one of the keys to just success.

Another lies in his exceptional ability to marry commerce and technology in creative ways, imitate inventiveness and willingness to take the risks inherent in this process.

Indeed, the history of Amazon.com is one of daring leaps. One such leap involves creating the capacity to “search inside!” the books sold by his company. Not by designing a modest pilot project, but by committing the resources to make it possible to scour the text of more than 120,000 volumes when this feature debuted in 2003.

Other innovations would be included 1 click shopping, online product reviews by customers, and of course, the Kindle reading device which we test drove in 3 courses this fall. Mirroring rapid growth of Amazon itself, the number of books available through the U.S. Kindle store top 460,000 in 2009. Just 2 years after its launch.

And there is no turning back. Our vision is every book, every printed in any language all available in less than 60 seconds, Jeff stated.

An audacious proposition to be sure but Albert Einstein once observed, “If at first idea is not absurd, then there is no hope for it. “

Perhaps the American Academy of Achievement summarize our speakers impact best when it noted, “Having already revolutionized the way the world buys books, Jeff Bezos now transforming the way we read them as well. “

I like to think that Princeton helped to lay the groundwork for this revolution.

Dreamer and doer. Entrepreneur and engineer. Refreshingly unassuming even in the face of unimaginable success, Jeff has done his own【 ? 5:36】 proud. It is a true honor and pleasure to welcoming him back to old NASA today.

As a kid, I spent my summers with my grandparents on their ranch in Texas. I helped fix windmills, vaccinate cattle, and do other chores. We also watched soap operas every afternoon, especially “Days of our lives.”

My grandparents belonged to a Caravan club, a group of Airstream trailer owners who travel together around the U.S. and Canada. And every few summers, we’d joined the caravan. We'd hitch up the Airstream trailer to my grandfather's car, and off we'd go, in a line with 300 other Airstream adventurers.

I loved and worshipped my grandparents and I really looked forward to there trips.

On one particular trip, I was about 10 years old. I was rolling around in the big bench seat in the back of a car. My grandfather was driving, and my grandmother had the passenger seat. She smoked throughout these trips, and I hated the smell.

At that age, I'd take any excuse to make estimates and do minor arithmetic. I'd calculate our gas mileage -- figure out useless statistics on things like grocery spending. I'd been hearing an ad campaign about smoking. I can't remember the details, but basically the ad said, every puff of a cigarette takes some number of minutes off of your life: I think it might have been two minutes per puff. At any rate, I decided to do the math for my grandmother. I estimated the number of cigarettes per days, estimated the number of puffs per cigarette and so on. When I was satisfied that I'd come up with a reasonable number, I poked my head into the front of the car, tapped my grandmother on the shoulder, and proudly proclaimed, "At two minutes per puff, you've taken nine years off your life!"

I have very vivid memory of what happened next, and it was not what I expected.

I expected to be applauded for my cleverness and my arithmetic skills.

“Jeff! You are so smart! You had to have made some tricky estimates! Figure out the number of minutes in a year! And Do some divisions! “

That’s not what happened.

Instead, my grandmother busted into tears.

I sat in the back seat, didn’t know what to do. While my grandmother was crying, my grandfather, who’d been driving in silence pulled over onto the shoulder of the highway. He got out of the car and came around and open my door, waited for me to follow.

Was I in trouble?

My grandfather was a highly intelligent quiet man. He had never said a harsh word to me. Maybe this was to be first time? Or maybe, he would ask that I get back in the car and apologize to my grandmother. I had no experience in this wrong with my grandparents and no way to gage what the consequence might be.

We stopped beside the trailer, my grandfather looked at me and after a bit of silence, he gently and calmly said, “Jeff, one day, you will understand that it is harder to be kind than clever.”

What I want to talk about to you today is the difference between gifts and choices.

Cleverness is a gift, kindness is a choice. Gifts are easy. They are given after all. Choices can be hard. You can seduce yourself with your gift if you are not careful. And if you do, it will probably be to the detriment of your choices.

This is a group with many gifts. I am sure one of your gifts is the gift of a smart and capable brain. I am confident that is the case because admission is competitive. And if there were not some sings that you are clever, the dean of admission wouldn’t have never let you in.

Your smarts will come in handy because you will travel in a land of marvels. We humans -- plodding as we are -- will astonish ourselves. We'll invent ways to generate clean energy and a lot of it. Atom by atom, we'll assemble small machines that will enter cell walls and make repairs. This month comes the extraordinary but also inevitable news that we've synthesized life. In the coming years, we'll not only synthesize it, but we'll engineer it to specifications. I believe you'll even see us understand the human brain. Jules Verne, Mark Twain, Galileo, Newton -- all the curious from the ages would have wanted to be alive most of all right now. As a civilization, we will have so many gifts, just as you as individuals have so many individual gifts as you sit before me.

I got the idea to start Amazon 16 years ago. I came across the fact that web usage was growing 2,300% per year. I’d never seen or heard of anything grew that fast. An idea of building online bookstore with millions of titles, something that simply couldn’t exist tin the physical world was very exciting to me.

I had just turned 31 years old, and I have been married for a year. I told my wife, Mackenzie, that I wanted to quit my job and go do this crazy thing that probably wouldn’t work since most start-ups don’t, and I wasn’t sure what would happen after that. Mackenzie, also a Princeton grad and sitting here in the second row told me I should go for it.

As a young boy, I'd been a garage inventor. I'd invented an automatic gate closer out of cement-filled tires, a solar cooker that didn't work very well out of an umbrella and tinfoil, baking-pan alarms to entrap my siblings. I'd always wanted to be an inventor, and she wanted me to follow my passion.

I was working at a financial firm in New York City with a bunch of very smart people. And I had a brilliant boss that I much admired. I went to my boss, and told him I was going to start a company selling books on the internet.

He took me to a long walk in Central Park, listened carefully to me, and finally said, “That sounds like a really good idea! But it would be even better idea for someone who didn’t already have a good job.”

That logic made some sense to me, and he convinced me to think about it for 48 hours before making a final decision. Seen in that light, it really was a difficult choice, but ultimately, I decided I had to give it a shot. I didn't think I'd regret trying and failing. And I suspected I would always be haunted by a decision to not try at all. After much consideration, I took the less safe path to follow my passion, and I'm proud of that choice.

Tomorrow, in a very real sense, your life, life you author from the scratch on your own begins.

How will you use your gifts? What choices will you make?

Will inertia be your guide, or you follow your passion.

Will you follow dogma, or will you be original?

Will you choose a life with ease, or a life of service and adventure?

Will you wilt under criticism, or will you follow your convictions?

Will you bluff it our when you are wrong, or will you apologize?

When you guard your heart against rejections, or will you act when you fall in love.

Will you play it safe, or will you be a little bit swashbuckling?

When it is tough, will you give up? Or will you be relentless?

Will you be clever at the expense of others, or will you be kind?

I will hazard a prediction. When you are 80 years old, and in a quiet moment of reflection narrating for only yourself the most personal version of your life story, the telling that will be most compact and meaningful will be the series of choices you have made.

In the end, we are our choices.

Build yourself a great story.

Thank you and good luck. 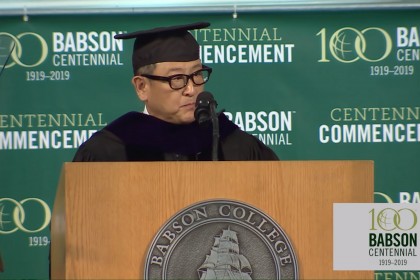 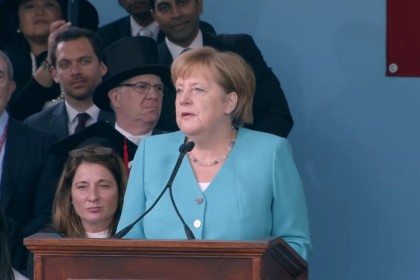 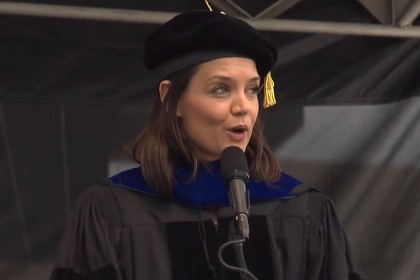 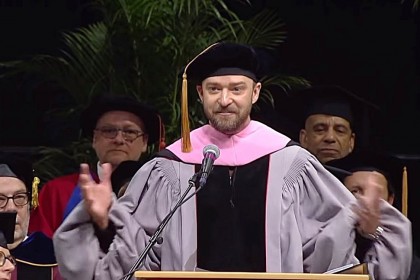 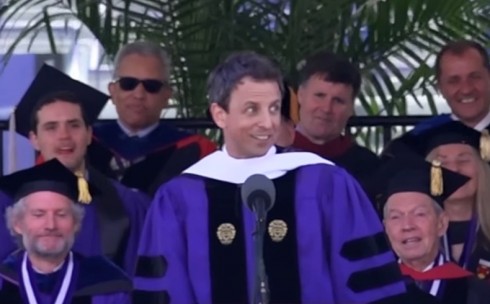 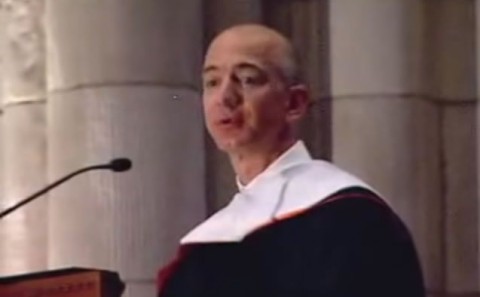